Made with shredded king oyster mushrooms and protein-rich chickpeas, this vegan tikka masala recipe creates a curry so close to the traditional chicken version even meat-lovers will love it. Yet, it's vegan, gluten-free, kid-friendly and so tasty.

It has been too long between curries on this blog - the last was my Japanese Tofu Curry -  and it's high time I remedied that.

Butter chicken and tikka masala were two of my favourites BIWV (before I went vegan) and I am so happy to be able to re-create one of them now.

What is Tikka Masala?

While there are variations on the history of tikka masala, most follow the lines of this popular food folklore:

Late one night sometime during the 1960's, a British aristocrat was served Chicken Tikka (chicken on skewers chargrilled in a tandoor) at an Indian restaurant. Complaining the dish was dry, the man sent it back to the kitchen. In response, an enterprising chef heated and combined a can of tomato soup, spices and yoghurt, poured it over the chicken and sent it back out. The dish was such a success the aristocrat returned to the restaurant again and again for more.

How to Make Vegan Tikka Masala?

Tikka masala is traditionally made with a meat protein - more often chicken - marinated in yoghurt and spices and char grilled. The meat is then added to a spiced sauce and served with naan or rice.

This vegan tikka masala cuts those steps in half.

The Trick To This Vegan Tikka Masala

The not-so-sneaky-trick to this vegan tikka masala is using king oyster mushrooms. Currently one of my  favourite things to cook with, king oyster mushrooms are delicately flavoured taking on any sauce or seasoning you care to pair them with. Also, their texture when shredded is pretty chicken-esque. I use them in my The Best Vegan Pot Pies Recipe and it's so good!

Non-traditionally I have added chickpeas and baby spinach to this recipe but I never like to miss an opportunity to add protein and iron to my recipes. Especially when MY DAUGHTER EATS IT! No, I'm not yelling at you. I am a little excited though because if you've been here before you might recall my ongoing battle to get my four year-old to eat well. She has recently added mild curry to her approved list. Who would have thunk it? This vegan tikka masala is family-friendly!

Make it Your Own

While my husband likes his vegan tikka masala with a little added chilli, the Elf and I are more than happy with the warming mix of traditional spices and tomato based sauce as is. That's the beauty of this family-friendly curry; those that like it hot can add a little spice while us less adventurous types can enjoy this much-loved curry's slightly buttery, full-bodied tomato and cream flavour. Served with aromatic basmati rice and naan bread, this authentic mushroom and chickpea tikka masala is quickly becoming one of our family favourites.

For the Spice Blend 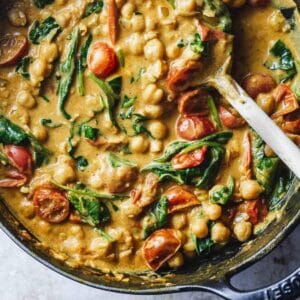 Spicy Eggplant Stir-fry with Enoki Mushrooms
This spicy eggplant stir fry looks like a noodle dish but those gorgeous silky strands are enoki mushrooms! Perfectly gluten-free and low in carbohydrates, this noodle-not-noodle stir-fry is vegan and shove-in-to-your-face delicious.
Read More 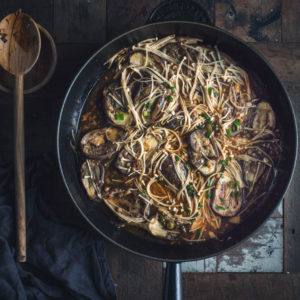 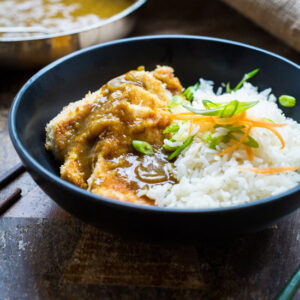