In my last post I shared a delicious Masoor Dal with Roasted Eggplant and while it is wonderful on its own I have to be honest. I believe everything is better with bread. So, today I am sharing my homemade vegan naan recipe to mop up all those aromatic curry sauces. It wouldn't do to lick the plate now, would it?

I have been on a flat-bread kick over the months in lockdown among other things. Glued to Christopher Kimball's Milk Street Cooking School's online classes, I've made my way through basic flatbreads, coconut milk tortillas and scallion pancakes.

Have you seen the classes? The school offered - and I think are still offering - their online cooking classes free over the past months and I signed up to a heap of them. Much of the content is anchored in the basics but I've learned a new trick or two, which is awesome. It's always a good day to learn something new.

You are going to love making your own vegan naan. This recipe is:

Naan is a yeast-leavened bread traditionally cooked in a clay oven called a tandoor (or tannour). These ovens get to stinking hot temperatures - up to 480°C - and cook the bread super fast.

"Great, but I don't have a tandoor lying around..."

Me neither! So, we are going to grill each naan on a hot skillet. You can make naan any day of the week with the equipment you have in the kitchen. I use my new and still-shiny stand mixer to knead the dough but I have also made it by hand. It takes around 10-minutes to hand knead the dough before it rests for an hour.

A Word on the Dough

Vegan naan dough is soft and pliable like a fluffy pillow. It should be tacky but not sticky.

Sticky dough is just that - it's sticky and attaches to your fingers and hands making a heck of a mess. Tacky dough, on the other hand, will stick to your hand when pressed but will come away easily leaving only a little behind.

So are you ready to make your own homemade vegan naan?

Just like when you go to an Indian restaurant you can enjoy your naan with a curry like my Walk-Away Chickpea Tomato and Spinach Curry. You can even use it as a pizza base. I've used leftover naan as a wrap for my Mind-blowing Vegan Sabich Sandwich or to mop up my 5-Ingredient Pumpkin Lentil Soup with Ginger.

Make it to go with tonight's dinner and make enough to enjoy for lunch tomorrow. Enjoy, x.

Can I freeze my naan bread?

Yup. However, naan bread can get a little chewy after freezing. This is how I freeze my cooked naan bread to avoid chewiness.

You can freeze your naan after you've grilled them. Allow them to cool completely and wrap them well in foil with a sheet of parchment between each naan. Pop them in a freezer-proof container. They'll freeze for up to 3 months. Defrost the naan slowly in the fridge before grilling it again on low heat to warm.

Can I freeze my naan dough before cooking?

To freeze the raw naan dough make it and allow it to proof for the hour. Divide the dough into equal parts and shape them in to flattened discs. Stack the discs placing a piece of parchment paper between each. Pop them in to a freezer-proof container and freeze for up to 2 months. 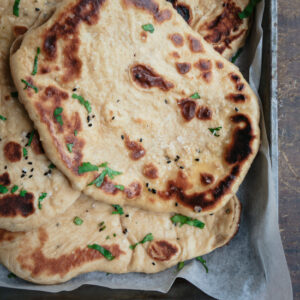 This recipe makes 6 large naans or 8 medium-sized.  I use unbleached all-purpose flour which is slightly more coarse than regular all-purpose flour. If you need to add a touch more flour to your mixture, go ahead.  The dough should be tacky but not sticky.  Pro Tip: You can lightly brush the top of the rolled out naan with a touch of water to make sure the bread doesn't stick to your pan. Place the naan wet side down on the pan to cook.  Nigella Seeds: Nigella seeds give that authentic naan flavour but you can still make vegan naan if you don't have them. It is worth finding a small bag the next time you go spice shopping though 🙂