With plump medjool dates, golden sultanas, dried cranberries and pears and a goodly swig of brandy, my favourite vegan Christmas pudding recipe makes creating a show-stopping Christmas dessert so easy. Seriously, I am feeling like a festive Martha Stewart over here.

OK, so I didn't get this recipe up in time for Stir-up Sunday but you still have plenty of time to make this gorgeous, fuss-free pudding before the jolly man in the red suit arrives.

While plum or Christmas pudding always gets better with time - especially if you feed it a small splash of brandy each week - you can happily make this pudding the day before the big event. It will still be moist, boozy and wonderful.

As far as Christmas fare goes it doesn't get too much more traditional than a Christmas pudding. Served with brandy sauce or butter, this quintessentially English dessert is a festive explosive of flavours. To all my non-pudding friends scratching their heads about a) Stir-up Sunday and b) calling a Christmas pudding a plum pudding, let me briefly explain.

What is Stir-Up Sunday?

Stir-up Sunday harks back to Victorian times when families would gather to stir the Christmas pudding five weeks before Christmas, the last Sunday before the beginning of Advent.

The opening words of the Common Book of Prayer used on the last Sunday read "Stir up, we beseech thee, O Lord, the wills of thy faithful people," so stir they did. Each family member stirred from East to West in honour of the Wise Men making a wish as they stirred.

Is Christmas Pudding and Plum Pudding the Same Thing?

They are. Pudding as we know is far removed from its 14th century origins when it appeared on the table a beef and mutton porridge infused with dried fruits, spices and wine. This porridge, or "fermenty", was later thickened with breadcrumbs, eggs and fruit to become the pudding we know today.

Plum pudding and Christmas pudding are references to same the dessert and neither has to contain plums. Thankfully, neither contains mutton or beef either. Phew.

Making a Christmas pudding may seem daunting but this vegan Christmas pudding recipe couldn't be simpler. After soaking your dried fruit overnight in a lovely glug of brandy the remaining ingredients are stirred together and the pudding is cooked in a bain-marie set up in the oven.

The most difficult part for me was tying the damn string around the mouth of my pudding pot. I was alone and had to use my boobs to hold the string in place while I tied the ends with my fingers. I found a youtube video with a nice lady doing a far more graceful job of it, so I'll leave the link here (you can find the instructions for setting up your pudding bowl at 1 min 35 seconds).

Make Your Own Vegan Christmas Pudding.

Christmas pudding quite often has glacé cherries and orange rinds, neither of which I like. The beauty of these festive puddings is that you can make them your own. My vegan Christmas pudding recipe is filled with plump medjool dates, golden sultanas, dried cranberries, dried pears and chopped pecans. These are the flavours I like.

If you don't like any of these dried fruits, simply swap them for ones you do. I would advise to match textures where you can for example if you don't like dates, prunes will work. Dried apricots will easily step in for the dried pears if you can't find them.

I have used fresh orange zest and juice and substituted traditional suet for a lesser measure of coconut oil. Combined with sourdough breadcrumbs, a good swig of brandy and aquafaba to replace traditional eggs and this festive dessert is easily veganised.

If you haven't tried your own Christmas pudding, maybe now is the time to start a new tradition. 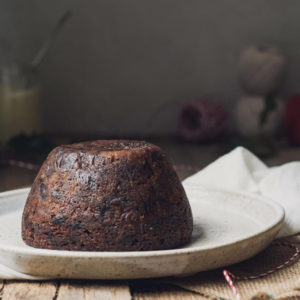