If you love dumplings like I do you are going to love these vegan bao buns. Beside being completely delicious with they are a fund weekend cooking project the whole family can get in on.

Weekend Yum Cha is something of a family tradition in our little brood. Ever since the Husband and I were dating we've frequented our local Chinese restaurant for the soft, plump dumplings sitting prettily in their bamboo baskets. These days we are a party of three and while the Elf isn't terribly adventurous she loves the BBQ pork steamed buns. So, I've created a vegan version with these Vegan Bao Buns with BBQ Mushroom.

What is a Bao Bun?

A bao bun or steamed bun or  baozi (包子) is a soft round bun traditionally filled with BBQ pork or meats.

Funnily, calling these bao buns is incorrect -bao means bun, so it’s like saying ‘bun bun’. Traditionally they are called gua bao but as their popularity has spread so has the name bao buns.  So 'bun buns' it is!

Different to a dumpling, the bao dough is light, fluffy and more bread-like. You can buy plain bao buns from some Asian grocers but, if you're feeling adventurous, you can make your own.

These vegan bao buns with BBQ mushrooms have been a long time coming with the idea bouncing around my internal kitchen for almost a year. While I loved the thought of these little guys I was a little daunted; I wanted to get the traditional cloud-like dough just right.

After a few mis-fires I ended up using this recipe from the Woks of Life as a base. These wonderfully thoughtful bloggers included a folding tutorial video, bless their socks. It is incredibly useful to dumpling novices such as myself.

Turns out, the dumpling dough is super simple to make. While it takes a while to proof and there is kneading involved (great for the arms), it's super easy and something the kids can help with too.

How to Make Bao Buns

With the dough sorted and my doubts assuaged, the filling was a piece of cake. A deliciously smoky, sweet mushroom filled cake. This filling is amazing. If you weren't inclined to make the traditional dough, this filling will work in a grilled wonton wrapper or simply spooned on to a steaming bowl of rice.

For those who love the warming and wonderful BBQ flavours of traditional char siu pork but want a vegetable alternative - this is it. Finely sliced mushrooms, red onion, celery, carrot and kale combined in a sweet, slightly smoky soy, hoisin and five spice sauce. This filling is mouth-watering.

I am the first to admit my dumpling (baizo*) pleating technique is not going to win me any culinary awards but I am giving my self a commendation for effort. At the end of the day these vegan steamed buns were a fun project and something I have always wanted to try. Plus, anytime spent with the Elf in the kitchen is time well spent to me.

* Another useful folding video thanks to Chinese Sichuan Food

One could argue these steamed buns are quite the effort to get the Elf to eat her vegetables. Perhaps. I've been told this phase in her dining life is just that, a phase, a cry for attention, a blip.  That may be so but that doesn't mean we stop trying. My thinking is that food is our earliest introduction to new cultures and new experiences. I want her to embrace the different, be brave in her choices and try new things. For me that cannot begin early enough and I can't think of a safer or better place to start that journey than in my kitchen.

These BBQ mushroom vegan bao buns are everything I wanted them to be. An added bonus is that when I don't have time to make the dough I can quickly enjoy those wonderfully authentic filling flavours on a bed of rice. The mushroom and vegetable filling is ready in no time and is so ridiculously good. 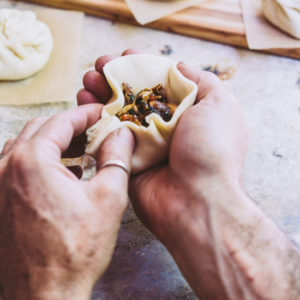 For the Bao Dough

For the Bao Dough

For the BBQ Mushroom Filling

LOVE DUMPLINGS? YOU'LL LOVE THESE THESE OTHER GREAT DUMPLING RECIPES →

Homemade Dumplings w Peanut Chilli Sauce
My homemade dumplings with peanut chilli sauce make for a great afternoon in the kitchen and something the kids can help with. You'll overeat them and have the Yum Cha experience at home. 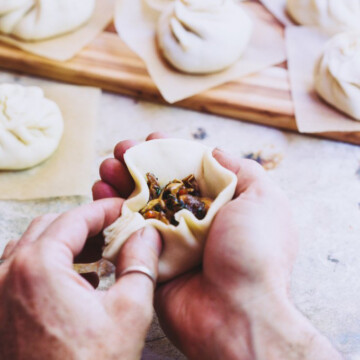 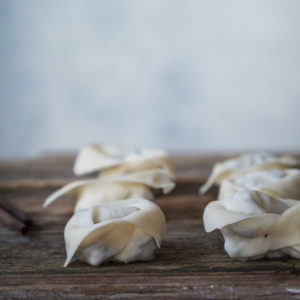