Calling all potato lovers! We are taking the Spanish classic Patatas a lo pobre to the next level with salty olives, artichokes and peppers. It's spuds but with attitude.

This recipe was originally posted on June 5, 2016 and updated with recipe variations, cooking steps, FAQ's and new images on August 17, 2022.

What is Patatas a lo Pobre?

Patatas a lo pobre, Poor man's potatoes, is a traditional Spanish dish that can be found on many a tapas menu.

Originating in medieval Spain, the dish was made up of inexpensive ingredients - potatoes, onions and peppers - making it affordable for the poorer masses. Thus the name, "poor man's potatoes".

I call this version loaded Poor man's potato because it loads up with the additional flavours and textures of artichoke and salty olives. I also cook the dish in a small amount of stock to bring it all together and add depth.

Reasons to Love This Spanish Classic

Just when I thought potatoes couldn't be anymore awesome, along comes patatas a lo pobre. This rustic potato dish is perfect as a side but more than enough for a cheeky main. It's:

Potatoes. Use a good all-purpose potato. I use a combination of Baby Reds and Baby Creams but you can use Desirees, Maris Piper our Yukon.

Onion. I love red onions here but honestly, you can use a yellow onion or a few good sized French shallots.

Peppers. Roast peppers from a jar are perfect here but you can also roast your own.

Olives. I love the saltiness of Kalamata olives but milder green olives are totally OK. Olives aren't traditional, so make it how you like it. I often use both!

Stock. The potatoes are cooked a second time in a a little stock. use a good quality vegetable stock or a vegan chicken-style stock.

Artichoke hearts. Save yourself some time and use canned or jarred cooked artichoke hearts. I love homemade artichokes but honestly, they play a supporting role here. Go with good old store-bought chokes.

How to Make Loaded Patatas a lo Pobre

Step 1. First you're going to pre-cook your potatoes in a large pot of water.

Step 2. Next sauté your onions in a heavy bottomed skillet before adding the spices.

Step 3. Add the potatoes face down, followed by the peppers, artichokes and olives.

Step 4. Finally, add the stock and gently cook it all down until the potatoes are cooked through but still hold their shape. Add some parsley and you are ready to serve.

Patatas a lo pobre is traditionally a really simple dish but you can add texture and flavours as you like. I love the combination of olives, peppers and artichoke but you could add:

The beauty of this dish, besides its complete deliciousness, is that almost all ingredients are from the pantry if you keep your potatoes and onions in the pantry, which I do.

I bought a small tub of mixed olives from the deli and a fresh bunch of curly green parsley but that's it, the rest we already had. Who doesn't love that?

If you like the simplicity of a one-pot mushroom pasta or the essence of the wholemeal pissaladiére, you'll love this.

Which potatoes work best in Patatas a lo pobre?

How do I store the any leftovers?

You can store you patatas a lo pobre in a sealed container in the fridge for up to 3 days. Can I say, it's pretty delicious served at room temperature as a salad.

Spaghetti with Tomato Sauce and Olives

If you like this recipe, please check out my cookbook. Great Vegan Meals for the Carnivorous Family is full of simple, carnivore-approved family recipes. 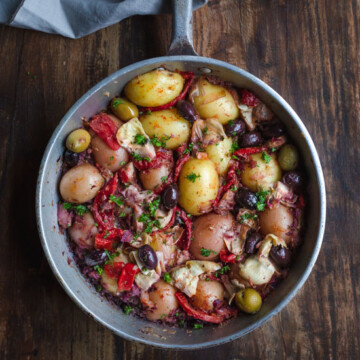 Which potatoes work best in Patatas A Lo Pobre? All-purpose potatoes work best. Think "Desiree, Russets, Yukon or Maris Piper. A good old Chat will work too. How do I store any leftovers? You can store your patatas a lo pobre in a sealed container in the fridge for up to 3 days. Can I say, it's pretty delicious served at room temperature as a salad.