This wholemeal pissaladiére is a vegan, wholesome and seriously tasty bend on the traditional caramelised onion and anchovy French pizza. 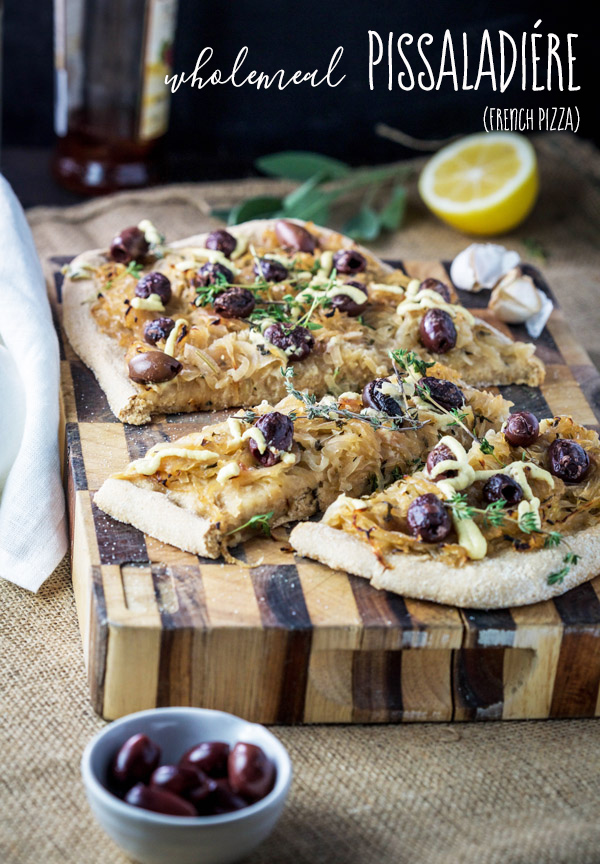 A long, long time ago when the internet was still in its infancy, the millennium bug loomed and black was the new black, a young girl fresh from university travelled to England to be with her love. Flying across the sky to meet her destiny, she had no idea the trip would be fleeting, the breakup tragic or that the French have their own pizza.

Licking her wounds  in Surrey, the girl's French sister-in-law and her grandmother taught her how to make pissaladiére, a wonder of caramelised onion, anchovies and olives on a pizza bread. The anchovies are gone, but my wholemeal pissaladiére still honours the sweet saltiness of the original recipe.

I craftily concealed the identity of the broken-hearted girl so I'll confess to you, friends, it was me. The cad was untrue and I languished in grief  for several months living with my long-suffering brother and his family. But, as with all twisted fairy tales, a lesson is learned and my lesson was passaladiére. Originating in the south of France this pizza, or tart, is a perfectly balanced sweet and savoury bite. My recipe for wholemeal pissaladiére has both the sweetness of caramelised onions, the saltines of kalamata olives with a creamy dash of cashew cream. I used a wholemeal pizza dough recipe from Sally's Baking Addiction. I substituted regular sugar for coconut sugar and cornmeal for semolina.  I also swapped the honey for agave. Sally has wonderful and clear instructions, so I won't repeat them here. I have also made pissaladiére with a slightly crumbly cauliflower pizza and it was delicious.

While there is a little preparation in this wholemeal pissaladiére, it comes together quickly. It is also well worth the effort. Additionally, you get enough pizza dough for two pizzas, much less work next time!

I hope you enjoy, xx. 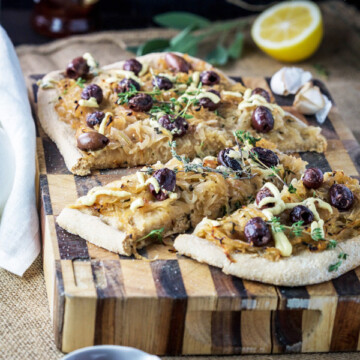 For the Pizza Dough

For the Caramelised Onions

For the Cashew Cream

To Make the Pissaladière