Today, it is Autumn and the hills are breathtaking in their Autumnal finery. Gold, red, copper and brown leaves are everywhere. It brings out the kid in me, all I want to do is jump and roll. And it's apple season what's more so what better way to celebrate than with Spiced Apple Pie Waffles.

I've never been much of a waffle-eater. We are more pancake people in Australia. And fritters. We are big on fritters.  Recently, however, I bought a waffle iron and I am officially a convert. Crispy on the outside, soft on the inside and drizzled with maple. What is not to love? Well, you do have to buy a waffle iron if you don't have one already and me thinks that might include most Australian families (or have I been living in a waffle-free bubble on my own?). However, waffle irons are pretty cheap and the waffle itself is seriously versatile.

While these spiced apple pie waffles are inspired by Autumn, they would work all year round; the same way ice-cream works at night in the dead of Winter. I don't understand the science, I just know it works. Ice-cream is chemically proven to take the chill out of Winter. This is especially true if the ice-cream is served with chocolate sauce. True story.

Today however, I simply sliced delicious and crunchy Red Gala apples and scattered them over the top. I love the crunch and slightly acidic sweetness the apples add. While everything is tastier in-season, this recipe doesn't call for apples to be in their prime. I use apple sauce in the waffle batter and apple juice in the syrup.

Have I mentioned the syrup? No? The syrup is compulsory. The waffles have a hint of spice but the syrup...the syrup is where the "pie" comes together. Cinnamon, apple juice and a tiny pinch of ginger warmed together with maple. I serve mine with coconut ice-cream and fight the dog to lick to the plate. Another true story. Enjoy, x. 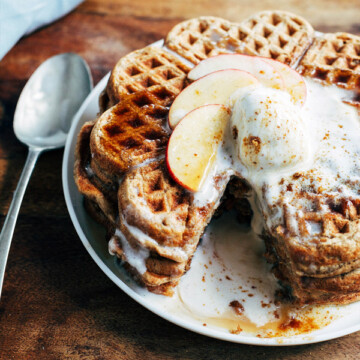